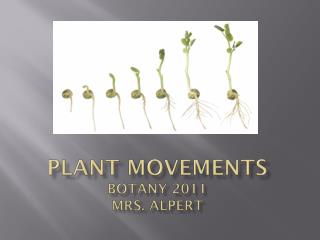 Plant Movements Botany 2011 Mrs. Alpert. PLANT MOVEMENT. Higher plants, being fixed to soil, cannot move from place to place. Really, have you ever seen a tree with legs?! Yikes. However….. within the plant body various mechanisms are in constant motion! For example, there is movement of: Leaf Botany and Plant Cell Biology - Leaf function. the main function of leaves is to absorb sunlight and use this energy

Plant Movements and Growth Responses - . chapter 11.8. what is plant m ovement?. plant movement is a response to stimuli