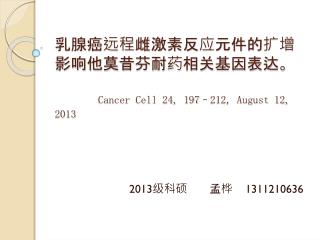 Psychological aspects of CANCER - . professor lorraine sherr. incidence. 1 in 3 will develop cancer quarter of a million

Highlights in the Management of Breast Cancer Roma, 10 Maggio 2013 - . molecular tools for decision making in adjuvant

Cancer - Med/surg-2013. cancer. oncology is the specialty dealing with cancer and treatment. cancer. characterized by