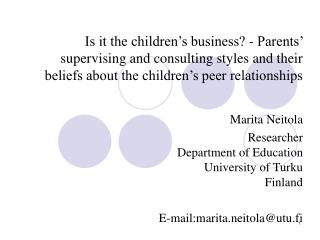 Is it the children’s business? - Parents’ supervising and consulting styles and their beliefs about the children’s peer relationships. Marita Neitola Researcher Department of Education University of Turku Finland E-mail:marita.neitola@utu.fi. Direct parental influences. A camp of care - Finding safe, enriching, and affordable summer camp for typical children is often a challenge for

The Developing Child - . ms. brown 133-b. chapter one learning about children. 1-1 beginning your study of children 1-2

The ADA, IDEA, and Section 504 in Education: - . understanding the laws, advocacy strategies and current issues for our

Evidence-Based Practices for Teaching Skills to School-aged Children and Youth with ASD - . candace a. fugazy ma.edu,

Parenting Conference 2013 - . session one the command to parents. “before i got married i had six theories about

Gastrointestinal Disorders in Children - . dr. nataliya haliyash nursing care of children. upon completion of this