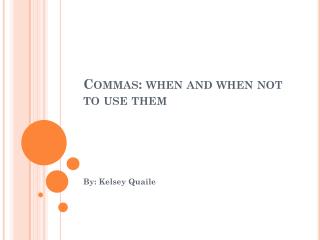 Commas: when and when not to use them. By: Kelsey Quaile. If you have trouble using commas…Just remember PELICAN!. P arenthetical elements E lliptical constructions L ists and series I ntroductory elements C ompound sentences A ntithetical elements N on-essential elements. Graphics: When and How to Use Them - Tc 151: visual communication important points: graphics can more easily convey

When to Use This Presentation - Sql server deployment planning services. put your it investment to work. agenda. planning

Tutorial: When to Cite and When Not to Cite - . a presentation of the instructional unit of the sacramento state

Commas, to use or not to use? - . english iii ms. pledger. use a comma to set off appositive phrases in sentences. an

When to NOT use commas! - . but first….dol. tony used to win a lot of boxing matches until he hurts his hand and now he

Normative Arguments – how and when to use them - . what are ‘norms’?. a norm is a standard of social behaviour that

Badminton: Type of shots and when to use them - . brian fahey and brandon sible kin 460. badminton shots. drop shot

When should you use commas? - . by sherry amster. lets see what you know. 1)a)she left albany, new york, on january 18 of

Influence: When to Use It - . use this format to persuade your audience to think about a topic. take action regarding an

When and Why to use Simulations? - . simulation enables the study of complex system . simulation is a good approach when

PHONEYS AND WHEN TO PLAY THEM - . common in club and tournament play ethical? comparable to bluffing in poker when you

What To Use When….. - What to use when…. ken kopp fclsa paragon vision sciences. paragon crt crt dual axis. all are

When to Use Commas and Semi Colons - . you will be responsible for knowing and applying the rules for commas and

Composite Indicators: When and How To Use Them - . jon hall global project, oecd. composite indicators. a powerful tool

When &amp; When Not to RESCUE - . helping hedgehogs in your garden www.pricklyhedge.co.uk. so, you’ve found a