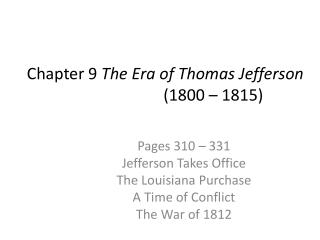 Chapter 9 The Era of Thomas Jefferson (1800 – 1815). Pages 310 – 331 Jefferson Takes Office The Louisiana Purchase A Time of Conflict The War of 1812. New Republican Policies. Jefferson fired tax collectors, and some diplomats and backed up his laissez faire ideas. Chapter 11, An Era of Expansion (1800-1815) - . essential question: what were the causes and national effects of national

The Era of Jefferson - . the era of jefferson: learning targets. i will… explain the “deal” brokered to allow

The Age of Thomas Jefferson up Until 1815 - . themes . profile thomas jefferson marbury vs. madison louisiana purchase

The Era of Jefferson - . bell ringer: create a k/w/l chart in your notes what do you already k now about jefferson? what