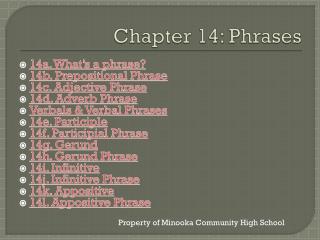 Third 100 Fry Word Phrases - . these are some of the most common phrases students find in their reading. practice reading

Which Words or Phrases are Ambiguous? - . csit 58 chapter 4. determining meaning. once you identify the issue, conclusion

Phrases مركب غير مفيد - . the noun/adjective and possessive phrases. the phrase. any group of words that are

Sayings and Phrases - . for the 5 th grade. the big idea. sayings and phrases are important to study because they are

Prepositional Phrases - . chapter 10. prepositional phrases. scientists state that the continents have shifted throughout

Prepositional Phrases - . prepositional phrases . introduction activity: write a sentence or two that tells where and

Unit 2 - Prepositional Phrases The unit ’ s big question: - How do i add specifics through prepositional phrases?. all

Phrases &amp; Clauses - . henderson. phrases. a phrase is a group of words that behaves as one particular part of

Phrases مركب غير مفيد - . the noun/adjective and possessive phrases. the phrase. any group of words that are

ABSOLUTE PHRASES - . the following sentences were written by professional writers, but some parts have been deleted. she