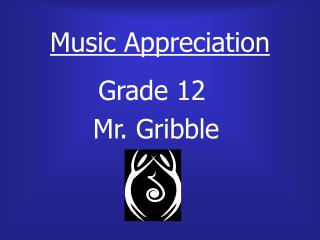 Music Appreciation. Grade 12 Mr. Gribble. The Modern Era. It is a blend of many types of music. It blends forms of popular music such as jazz, blues, and folk and many new techniques. Claude Debussy 1862-1918.

music - . by: omer marianovski ben einav. music today. music is an art to many people in many cultures, music is an

STYLES OF MUSIC - . national 3-5 understanding music. learning outcomes. there are many different styles of music.

ELEMENTS OF MUSIC - . there are several key elements of music. when combined and used correctly they express emotion and

Appreciation Sundays - . your ministry is not in vain. appreciation sunday. the ministry of brett &amp; katie sears

J.S.Bach appreciation in Duvall, WA - . from bach to einstein and beyond port townsend, march 3, 2013. vladimir chaloupka

Music Festivals: Summer 2012 - Large or small, these music festivals brought musicians and fans together from around the

音樂欣賞 - . music appreciation. dance. like all the arts, finds expression in an apparently infinite range of

A Brief Overview of Music &amp; Music Education in the History of Ideas --from Antiquity to the Present James