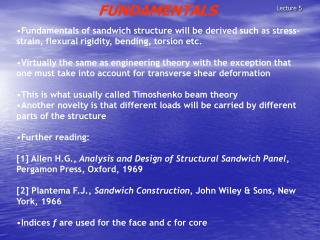 Fundamentals of sandwich structure will be derived such as stress-strain, flexural rigidity, bending, torsion etc. Virtually the same as engineering theory with the exception that one must take into account for transverse shear deformation This is what usually called Timoshenko beam theory