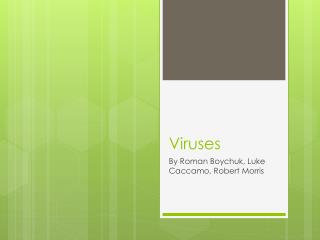 Viruses. By Roman Boychuk, Luke Caccamo , Robert Morris. What is a virus?. Viruses are small intracellular structures containing DNA or RNA surrounded by a protein shell Viruses lack any organelles, and thus can only survive and replicate within a host cell. Living or Non-Living?.

Viruses - . gaiser life science. know. what do you know about viruses?. “i don’t know anything.” is not an

Viruses - . general characteristics of viruses. 1. depending on one’s viewpoint, viruses may be regarded as

Viruses and Bacteria - . chapter 18. viruses – alive?. what makes something alive? organization based on cells and dna

Viruses - . 10b part i . intro. viruses are strange particles that are not classified as living but made of biological or

viruses - . campbell and reece chapter 19. virus . an infectious particle incapable of replicating outside of a cell,

Viruses - . 1897: a dutch scientist suggested that something smaller than a bacteria could cause disease. 1935: wendell

19-2 Viruses - . by: katelyn, rose and ashley . what is a virus?. viruses- particles of nucleic acid, protein and

Viruses - . medical ppt. http://hastaneciyiz.blogspot.com. is a virus a living organism?. chapter 1 – properties of

4.7 Viruses : The Enemy Within - . by: steffany copeland. viruses are life mimicking particles. latin word for poison

The Biology of Viruses - . where do viruses fit in the 3 domain, 6 kingdom classification of life?. viruses do not fit

Viruses - . section 19–2 this section describes the structure of a virus. it also explains how viruses cause

Computer Viruses . . . - Computer viruses . . . even the name strikes fear in the hearts of the most valiant! peggi