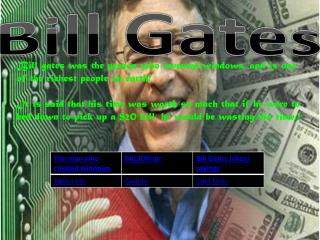 Bill Gates. Bill gates was the person who invented windows, and is one of the richest people on earth! It is said that his time was worth so much that if he were to bed down to pick up a $20 bill, he would be wasting his time.!. The man who created windows. BILL GATES - . done by: ahmed fandies. biography. bill gates was born on october 28 1955 in washington. bill gates is the

Bill Gates - . i believe in innovation and that the way you get innovation is you fund research and you learn the basic

Bill Gates - . by: abir c. background. bill gates made his fortunes with the creation of microsoft and the graphical