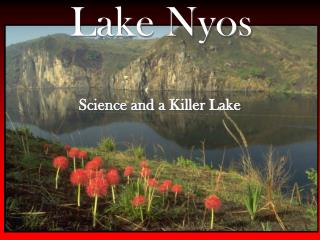 Lake Nyos. Science and a Killer Lake. Background. Lake Nyos lies in an old volcano crater (maar) in Cameroon, a country of Africa. Mt. Cameroon, an active volcano, is located 300 km away. What can you conclude about the climate in Cameroon?. Lake Nyos, the Village.

Lake Titicaca - . by: sam patterson. who?. the uros people have been living on the lake for hundreds of years—they were

Lake - . by: corey johnston. the lake. because i have had a lot of good times at the lake there are many species much to

Quake lake - . a closer look at the carnage. madison river

Lake Nicaragua - . the sweet sea. the location. physical features. it is a tectonic lake 19 th largest lake in the world

CATLIN LAKE - . a case study by kate hilfiker. location. catlin lake is located in the adirondacks in the huntington