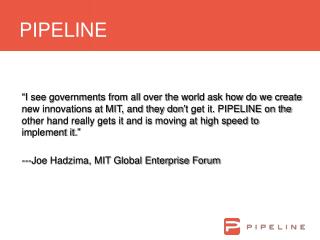 PIPELINE. “ I see governments from all over the world ask how do we create new innovations at MIT, and they don ’ t get it. PIPELINE on the other hand really gets it and is moving at high speed to implement it. ” ---Joe Hadzima, MIT Global Enterprise Forum. PIPELINE. Pipeline Summary - Try to put everything together for pipelines before going onto caches. pipeline summary. peer

Camisea: Gas Pipeline- Peru - . how do we improve the economy of a country while protecting the environment and the