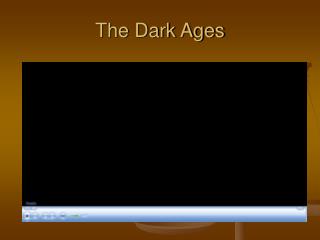 The Dark Ages. The Middle Ages ~ 449-1485 ~ Anglo Saxon or Old English Period (449-1066). England has had many invaders, each leaving their stamp on what we think of as “England” today. The Celts The Romans The Anglo-Saxons. The Celtic Heroes: A Magical World. The ‘Dark’ Ages - . early and high middle age psychology. the dark ages. period from about a.d. 410 (fall of rome) to

The Dark Ages - . charlemagne and the carolingian renaissance. early germanic kingship from clovis to charlemagne. early

The Dark Ages - . fall of rome recap. the fall of the roman empire was a turning point in world history!!. remember the

The Dark Ages - . western europe feels the pain. what happened to the world?. rome collapsed disruption of trade downfall

The DARK AGES - . europe before 1492. why so dark?. -europe ruled by monarchies and the roman catholic church -commoners

The Dark Ages - . why dark???. barbarian invaders destroyed the roman empire and its well-organized political, social and

The Dark Ages - . after the collapse of the mycenaean civilization, greece entered a bleak period that lasted for 300

Dark Ages - . with the fall of the roman empire … roads fell in disrepair trade in goods (barter)replaced money no

Were the Dark Ages truly dark?

Into the Dark Ages - . western rome destroyed by german and scandinavian invasions never reached the heights of culture

The American Dark Ages - . focus on 1880s-early 1900. introduction to the american dark ages. this time period was coined