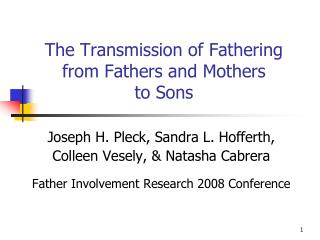 The Love and Tension Between Fathers and Sons - . by gabrielle and oliver. throughout “the kite runner” the theme of

FROM CHILDREN TO SONS - . god desires that we grow in maturity from the spiritual state of being children of god to sons

Mothers &amp; Fathers of the Desert: The Rise of the Monastic Movement - . the landscape of egypt, traditional

Single Fathers, Single Mothers, and Child Custody Statistics - There is a lot of speculation out there when it comes to

University Methods For Individuals And Mothers and fathers Alike - Consider the hard effort is over? our school

Fathering - . proverbs 23:22 (esv) “listen to your father who gave you life, and do not despise your mother when she is

The Prenatal Fathering Project - . meeting the needs of fathers in prenatal classes. agenda. research – what we know

Adolescent Mothers Their Babies Fathers: Predictors of Paternal Involvement and Coparenting - Adolescent mother and the

Resilience of fathers’ involvement after a family break down: Points of view of fathers and mothers living in poverty