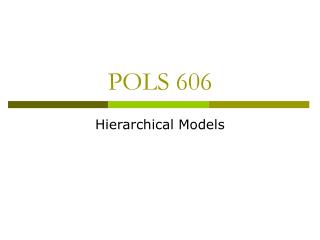 POLS 606. Hierarchical Models. Intro . Who are you? Fields Substantive interests? I am Dave American politics Campaigns and elections. Logistics. Book—Gelman and Hill Snijders and Bosker is recommended. Chapter 2 of G&H is up to you to master G&H don’t rely on matrix algebra to teach POLS 21 - . political parties. “saying we should keep the two-party system simply because it is working is like saying

POLS 570 week 7 - . introduction to correlation, crosstabs and causation. the test statistic and its distribution. recall

POLS 570 week 9 - . introduction to statistical correlation, crosstabs and causation. the test statistic and its

Presentations of Learning (POLs) - . the man, the mystery. what are pols?. an oral defense of a student’s learning.

POLS 3053 International Relations - The scholar __, one of the founders of

POLS 3022: Washington Internship - . what is the washington internship?. 7 weeks in us congress working in a

POLS 3053 International Relations - Twenty years ago constructivism?. a. was the dominant approach in international

POLS 3053 International Relations - In __, credible reports of mass famine serve to support the perception that communism