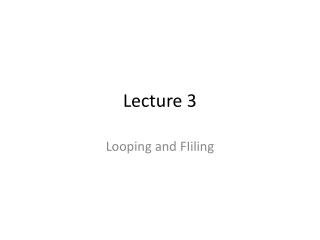 Lecture 3. Looping and FIiling. Topics. The Increment and Decrement Operators The while Loop Using the while Loop for Input Validation The do - while Loop The for Loop Running Totals and Sentinel Values. Chapter Topics. Nested Loops The break and continue Statements Lecture 3-3 - . summarizing ｒ relationships among variables. topics covered in this lecture note. we will cover several

Lecture 3 - . process concepts. what is a process?. a process is the dynamic execution context of an executing

Lecture 3 - . language and communication. chapter outline. what is language? how is language related to culture? how

Lecture 3 - . strategic human resource development. class exercise. have you ever trained another person? what

Lecture 3 - . more on editors: emacs and vi cop 3344 introduction to unix. emacs. in order to use emacs via the secure

Lecture 3 - . intrinsic semiconductor. when a bond breaks, an electron and a hole are produced: n 0 = p 0 (electron