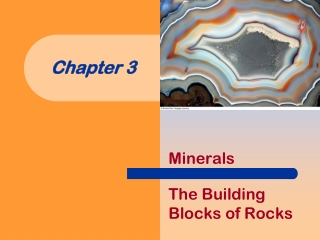 Chapter 3. Minerals The Building Blocks of Rocks. Chapter Outline. Introduction Matter–What Is It? Explore the World of Minerals Mineral Groups Recognized by Geologists Geo-Insight: The Precious Metals Physical Properties of Minerals Geo-Focus: Welcome to the Wonderful World of Micas