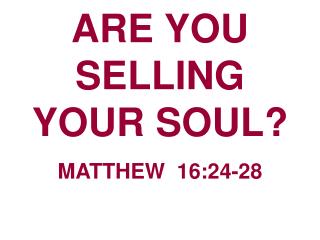 ARE YOU SELLING YOUR SOUL? MATTHEW 16:24-28. Is it possible to sell your soul?. Would someone actually sell their soul?. The answer to these questions is. YES. The thought is repulsive. Jesus says it’s a bad deal. There is no profit or advantage in doing this. The South braces for Hurricane Matthew - Roads in florida, georgia and north and south carolina were jammed and gas

How Personalised Selling Unlocks Competitive Advantage - In this new selling environment, you’ve got a few seconds to

Introduction to Theology - . an invitation to theology?. “jesus said to him, ‘love the lord your god with all your

Matthew - . jesus: authenticated and unique. matthew 1. v.1 “a record of the genealogy of jesus christ the son of

Selling Luxury Products - . “give me the luxuries of life, and i will willingly do without the necessities.” -1932

It is Well with My Soul - . when peace, like a river, attendeth my way, when sorrows like sea billows roll;. whatever my

CALL TO WORSHIP - . [chorus] bless the lord, o my soul o my soul worship his holy name sing like never before o my soul