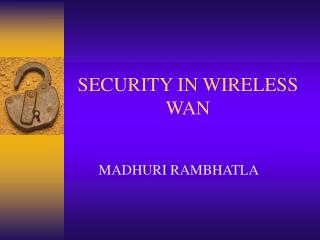 SECURITY IN WIRELESS WAN. MADHURI RAMBHATLA. OBJECTIVE. Thoroughly study the various aspects of Wireless Technology and analyse the vulnerabilities in Wireless WAN and its affects on the society. UCAR Wireless WAN - . update for ncab john hernandez jeff custard 17-oct-2007. outline . what is it? what do we use it

Wireless (in)Security - . or everything you wanted to know about wireless but were afraid to ask. introduction to 802.11.

Security in Wireless Networks - . mike swift cse 802.11b summer 2003. standard preamble. what is different about

Wireless Security - What do you mean wireless'? . wireless devices use radio frequency (rf) technology to facilitate

Wireless Security - . agenda. basics of an attack 802.11b overview wep other security measures future of wireless