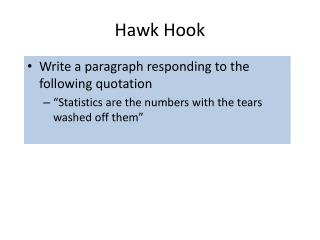 Hawk Hook. Write a paragraph responding to the following quotation “Statistics are the numbers with the tears washed off them”. Silent Discussion Vocabulary. Silent: Free from sound or noise Making no utterance Made without spoken dialogue

GALAPAGOS HAWK - . the galapagos hawk is a bird . was &quot;discovered&quot; by charles darwin in 1835 when, in

Hawk Mode - . a derrick jackson game. introduction to the game objectives of the game learning principle of the game

The Hook - Ask the audience a question. use a catchy phrase or quote. create a tongue twister. make an exclamatory

Hawk - . by: benjamin &amp; jonathan . problems. the problems that we have encountered are that the beak was n ot

Hook - . obesity is ranked 2 nd among preventable causes of death. “is fast food the main cause of obesity?”. by:

THE HOOK - . ideas for capturing your reader’s attention. 1. begin with a simile or a metaphor. my life has been a

The HOOK! - Twit - twoo !. the hook! on returning to the classroom from playtime the children found a mass of feathers in

Hook - . have you ever been giving a writing prompt and you needed something to help you start writing?. the write tool.