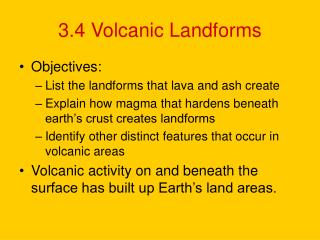 3.4 Volcanic Landforms. Objectives: List the landforms that lava and ash create Explain how magma that hardens beneath earth’s crust creates landforms Identify other distinct features that occur in volcanic areas Volcanic activity on and beneath the surface has built up Earth’s land areas.

How do geological processes and climate change affect evolution? - . it is by the ff. tectonic plates movements. volcanic

Look Beneath the Surface - . human trafficking is modern-day slavery. a victim of trafficking may look like many of the

What are Landforms? - . third grade science and social studies. what are landforms?. landforms are the natural shapes or

LANDFORMS AND BODIES OF WATER - . an atoll is a ring-like coral island that nearly or entirely encloses a lagoon. it is

VOLCANIC STRUCTURES Introduction - Two aspects of volcanism are relevant to the study of geomorphology: 1. there are a

Classifying landforms and landform development - . primary landforms. large masses of rock raised by the forces beneath