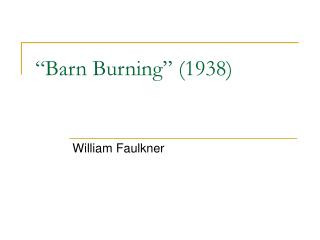 “Barn Burning” (1938). William Faulkner. William Faulkner (1897-1962). Greatest American Southern writer, won the Nobel Prize for Literature, 1950 A master of modernist experimentation in the novel, related to his obsession with time

Burning Man Festival - Scenes from the playa in the remote nevada

Welcome to - . st. philip cedar. www.stphilipcedar.ca. welcome and celebrations. joy. a candle is burning, a candle of

What is Respiration? - . a process of oxidizing food to release energy inside cells. oxygen. food (sugar). energy. carbon

Topics for Today - . what is in my gasoline? burning a gallon of gasoline…. readings for today. 3.6 quantitative