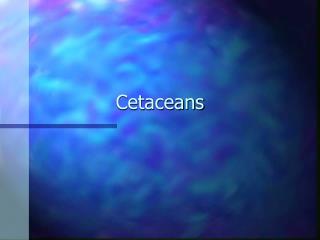 Cetaceans. Cetacean Evolution. The Cetacea probably originated in the Palaeocene, and had an Eocene differentiation. We have 2 questions: 1) From which mammalian group did the Cetacea evolve? 2) Do the 2 modern suborders share a common ancestor?. Cetaceans: Evolution.

Cetaceans - . giants of the sea!. mammals aquatic some of the largest animals in the world. cetaceans. whales. dolphins.