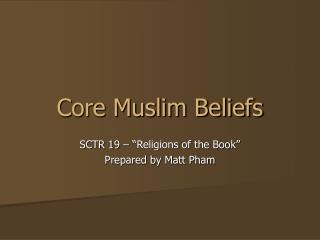 Core Muslim Beliefs. SCTR 19 – “Religions of the Book” Prepared by Matt Pham. Introduction. Six Articles of Islamic Faith (for the Sunni majority) In addition to Five Pillars of Islamic Practice Together, make up Aqidah (“creed”)

Core Beliefs - . core beliefs. core beliefs &quot;if we believe all kids can learn, how do we respond when they

Core Beliefs - . judaism. judaism is one of the world’s oldest religions, dating back approximately four thousand

Muslim Beliefs and Practices - . 5 pillars - practices. saying the creed praying five times a day fasting in the month of

Jefferson’s Core Beliefs - . translate each of the statements with your partners. your translations should include all

THE CORE BELIEFS OF CATHOLICS - . the creed. what is the creed?. the creed. sometimes called the nicene creed it is a

Developing a District Vision and Core Beliefs - . a basis for continuous improvement in the simsbury schools. why we’re

Beliefs - . wu wei is a central belief in taoism. it means &quot;not doing&quot; it is a spiritual request to

Beliefs - . this is how cologne cathedral usually looks at night. beliefs. due to a rise in numbers of people

Buddhism: BELIEFS - . beliefs. ultimate goal: the end of human suffering think about: how happy are you? what are the