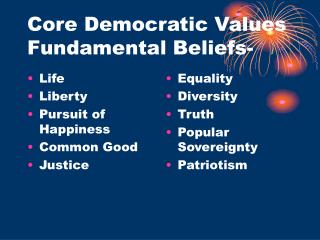 Core Democratic Values - . common good. citizens should work together for the good of all. the government should make

Core Beliefs - . core beliefs. core beliefs &quot;if we believe all kids can learn, how do we respond when they

Core Beliefs - . judaism. judaism is one of the world’s oldest religions, dating back approximately four thousand

Values and Beliefs - . broad objective. to acquire knowledge on values and beliefs and how they influence

Beliefs and Values - . the unseen core of every human group. learning outcome identify and explain the difference between

Beliefs and Values - . seeking social justice stop the life wasting! how do we support “lives of

Jefferson’s Core Beliefs - . translate each of the statements with your partners. your translations should include all

CORE VALUES - . code of conduct. values. beliefs, customs, or ideals that a person or organization feels are important