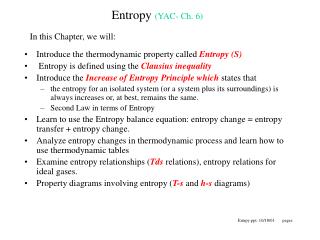 Entropy (YAC- Ch. 6). In this Chapter, we will: . Introduce the thermodynamic property called Entropy (S) Entropy is defined using the Clausius inequality Introduce the Increase of Entropy Principle which states that

Entropy (YAC- Ch. 6) - . in this chapter, we will:. introduce the thermodynamic property called entropy (s) entropy is

Second Law of Thermodynamics (YAC Ch.5) - . identifies the direction of a process. (e.g.: heat can only spontaneously

The Faith Fabric of Creation - . by kurt p. wise truett-mcconnell college. why i am a young-age creationist (yac). if yac

YAC: Tours - Description: foster membership and camaraderie amongst the yac, potential yac members, and the chapter

Lecture 6. Entropy of an Ideal Gas (Ch. 3) - . today we will achieve an important goal: we’ll derive the equation(s)

Earth Charter Youth Group - . who we are &amp; w hat are we aiming for. history. w e have started our first