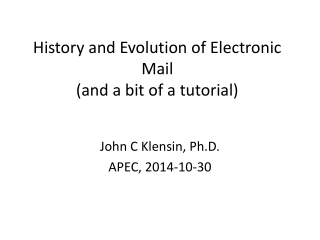 History and Evolution of Electronic Mail (and a bit of a tutorial). John C Klensin, Ph.D. APEC, 2014-10-30. About Internet History – A Disclaimer. Early period (~1965 to ~1985) Many parallel developments Extensive collaboration and idea-sharing Recent period Internet has become important

A bit of History - Creative drama: developing the skills of imagination, and spontaneity. it is about the process (the

A Bit of History - Cyrano de bergerac. a bit of history. on edmond rostand. playwright primarily of comedies wrote cyrano

A bit of history - Icpd at 15 the final push: accelerating implementation of the cairo consensus on population and

A bit of History - . a bit of history. 1943 warren mcculloch &amp; walter pitts:  how to: from neurons to complex

A little bit of History - . monkey hardware is a young, dynamic company from palatia, germany. formed by franz j muller,

A History of Evolution - . evolution is a process that results in heritable changes in a population spread over many

Digital libraries: A bit of history - . some historical perspectives and precursors. dl history? what?. is it a bit