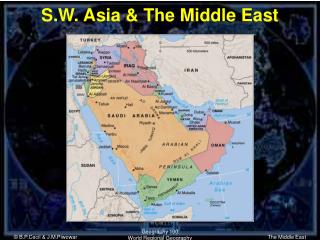 S.W. Asia & The Middle East. Arab Southwest Asia. Caught In the Middle: The region has central and strategic importance due to global choke points for world economy and its trade routes. This is also the most volatile region in the world due to strong cultural beliefs. Arab Southwest Asia.

A Bare Bones History of the Middle East - . 1. how will these revelations affect the war effort? 2. should these