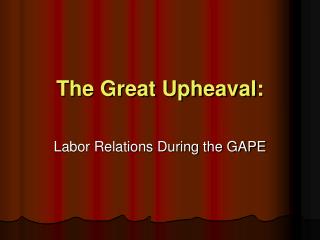 The Great Upheaval:. Labor Relations During the GAPE. 4 Major Upheavals . The Haymarket bombing (May 1886) The Homestead Steel Strike (1892) The Pullman Strike (1894) The Colorado Miners and Smelters Strikes (1903-1904). Why are they important?. Why were workers striking?

Causes of The Great Depression - . the great depression is one of the most misunderstood events in american history….

Causes of The Great Depression - . the great depression is one of the most misunderstood events in american history….

THE GREAT FLOOD - . when, where &amp; why. the great flood. age old story shared by many cultures and religions. the

Settlement of the Great Plains, 1860 to 1890 Homestead Act of 1862 Great Plains Indians - Settling the west. settlement

The Great Depression and New Deal - . essential questions. what underlying issues and conditions led to the great