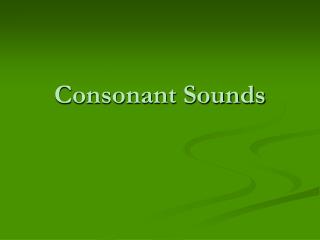 Consonant Sounds. t voiceless sound . The front part of the tongue touches the alveolar ridge. Produce it without moving your voice box. Rule . Whenever this sound comes in the beginning of the word, it gets aspirated. T ongue T ouch T ip T ogether T orch A tt ach pain t.

Final Consonant Sounds - . how to pronounce final consonants in english. in this lesson you will learn:. the difference

Consonant Transcription - . what is a consonant?. there are 24 consonant sounds. there are also allophonic variations.