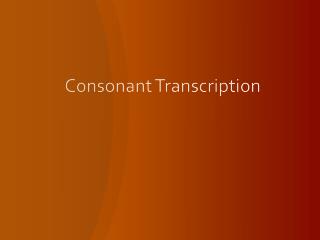 Consonant Transcription. What is a consonant?. There are 24 consonant sounds. There are also allophonic variations. Consonants are produced by vocal tract constrictions to modify the flow of air as it passes through the oral and/or nasal cavities. Consonant + “le” syllables - . rule: divide the syllables before the consonant &quot;-le” for example: