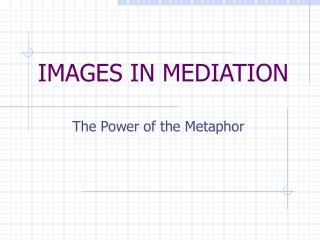 Video - 7. video. moving pictures. vision is probably the most important among our senses persistence of vision allows

Court Connected Child Custody Mediation - . introduction to mediation. mediation is required whenever there is a dispute

Images from the Industrial Revolution - . pages 428-435. objectives. identify the impact of the agricultural revolution

Issues for Sophisticated Users of Construction Mediation: When, How, and by Whom? Prof. John Barkai William S. - N school

Images and MATLAB - . matlab advantages. every variable in matlab is a multidimensional matrix. highly modular. no memory