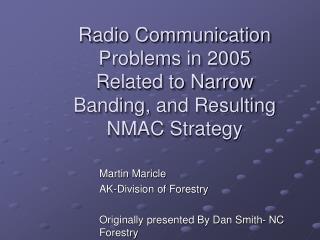 Radio Communication - The world of

Safety problems related to ICT - . and how to avoid them!. this presentation covers. possible safety hazards which could

Problems Related to Unmaintained Trees - We often talk about the benefits of having several beautiful mature trees, a

Communication Problems - . according to the article, what help ed to solve the problems with relationships between