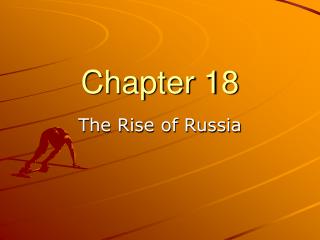 Chapter 18. The Rise of Russia. Before the Czars. Not really involved with outside world before the late 15 th century Mongol domination limited contacts Let local administrators rule, but limited cultural and econ development 1480 Poland, Lithuania, and others Western Contacts.

Russia in Eurasia - . a three-dimensional view. interstate relations - relations between the russian state and other

Russia and Its Southern Neighbours - . the context: geopolitical: geography is destiny civilizational: what is russia

SOCHI RUSSIA - . 2014 winter olympica. sochi beach. sochi is the largest resort in russia. located near the border with

RUSSIA AND THE REPUBLICS - . physical geography of russia and the republics. chernozem : (black earth) world’s most

SOCIAL SCIENCE - . cram-view. geography. russia is the world’s largest country at 17.1 million square km only about 7%

The Rise of Totalitarianism - . two ways to keep control. vocabulary to know. totalitarianism. a system of government

Rise of the - . today, all the nations are alligning exactly as the bible said they would! possible scenario…. a man