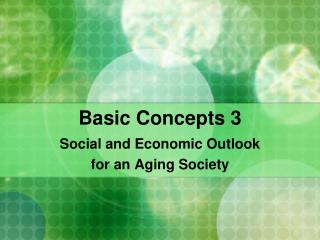 Basic Concepts 3 Social and Economic Outlook for an Aging Society The Varieties of Aging Experience Stereotypes suggest that age is the great leveler – thus, elders are commonly thought to be much alike However, the opposite is true

Basic Concepts 3 - . social and economic outlook for an aging society. the varieties of aging experience.

Chapter 3 – Basic Kinetic Concepts - . inertia – resistance to acceleration (reluctance of a body to change its state

Basic concepts - Networks must be able to transfer data from one device to another with complete accuracy. data can

Basic concepts - . what is a payment system? a system for transferring value between persons so as to complete exchange

Basic Concepts - . antireflective coating is used to prevent reflections from the chrome coming back into the resist

Basic Concepts - . a database is an collection of logically related records or files a relational database stores its

Basic Concepts - . a neural network maps a set of inputs to a set of outputs number of inputs/outputs is variable