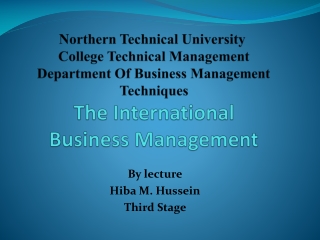 Third stage of labour - . dr.roaa h. gadeer md. definition. commences with the delivery of the fetus and ends with

Third lecture - . synapses:. it is the junctional region where one neurone end and the next begin. synapse can be

Presenting by Ghareeb B. Hussein - Language planning and

Saddam Hussein - . by: alyssa magliba preap per. 1. launching the iran-iraq war was an effort to consolidate its rising