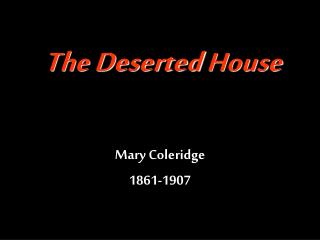 The Deserted House. Mary Coleridge 1861-1907. The Deserted House There's no smoke in the chimney, And the rain beats on the floor; There's no glass in the window, There's no wood in the door; The heather grows behind the house, and the sand lies before. No hand hath trained the ivy,

Deserted Island - . imagine…. you are going on a school trip with ms. quinn &amp; mrs. kieffer. this is a special

Deserted Island - . imagine…. you are going on vacation!. not just any vacation, you are taking a cruise!. you will be

DESERTED ISLAND （荒岛） - . you are on a boat. what’s the name of the boat? where are you going?. suddenly your

Dry Wells And Deserted Women - . gender, ecology and agency in rural india. brinda rao. she received a master's degree in

The House - By damon. the

The Bethune House - . home for women migrant workers in need. 33 “ do not mistreat foreigners living in your country,