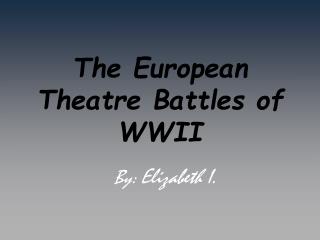 The European Theatre Battles of WWII

The European Theatre Battles of WWII. By: Elizabeth I. Important Battles. Invasion of Poland The Fall of France North Africa Battles Stalingrad Battle of the Bulge D-Day. The Invasion of Poland 1939. Hitler demanded the Baltic Sea port which was in Polish control

The European Theatre Battles of WWII

The Battle of the Atlantic - . longest continuous military campaign of ww ii 1939 right through to the defeat of nazi

MAJOR BATTLES IN WWII - . germans effective use of blitzkrieg. allied response. the miracle at dunkirk. who? britain,

The European Theatre Battles of WWII - . by: elizabeth i. important battles. invasion of poland the fall of france north

The History of British Literature - . time periods from the anglo-saxon era to present-day. old english/anglo-saxon

Like Hell with the Fire Out - . iwo jima, lying about half way to the japanese mainland from saipan and about 750 miles

1945-1990 - . the strategic and political struggle that developed after wwii between the united states and it’s western