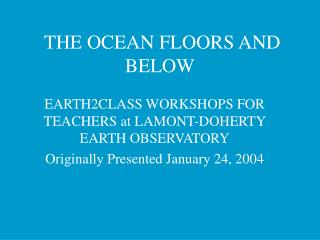 THE OCEAN FLOORS AND BELOW. EARTH2CLASS WORKSHOPS FOR TEACHERS at LAMONT-DOHERTY EARTH OBSERVATORY Originally Presented January 24, 2004. Guest Scientist: Gerard Iturrino: “The Structure and Composition of the Ocean Crust”.

An Ocean Below Enceladus’ Icy Crust? - . nasa’s cassini spacecraft has observed plumes of material escaping from

An Ocean Below Enceladus’ Icy Crust? - . nasa’s cassini spacecraft has observed plumes of material escaping from

Epoxy Floors, The Magical Floors - Epoxy floorings are a kind of carpeting that applied with layers of tough,

Floors and Ceilings - . price ceiling. maximum price that something can have usually government controlled gas (post

BELOW THE CLAUSE - Clauses as themes theme-rheme is purely a structure within the clause: a structure whose elements are,

Geology and the Ocean - . by: luc &amp; rebecca. what is geology?. geology is the study of the solid earth, like

Geology and the Ocean - . by: luc &amp; rebecca. the ocean. the ocean floor is divided into 3 major parts. these

Preference Floors Get Floors - Preference floors is a market leader in the engineered flooring industry, priding itself

Pollution and the Ocean - What is pollution?. pollution - the contamination of any part of the environment; includes air,

Below is a diagram of the Mid-Atlantic Ridge on the ocean floor.

Price Floors and Ceilings - Government intervention in the marketplace:. price floors and ceilings. we already know that

The development of floors - Bare earth or stone cobbles. the earliest methods of floor construction was a bare earthen