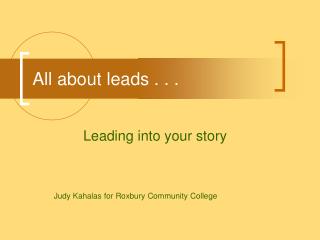 All about leads . . . Leading into your story. Judy Kahalas for Roxbury Community College. Keep it short!. A good lead is short (sometimes less than 25 words)! A good lead summarizes the story so that the reader knows whether to tune in or tune out. A good lead answers the 5 Ws