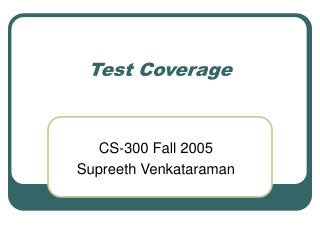 test coverage tools - What is test coverage?. finding areas of a program not exercised by a set of test casescreating

CS 4723: Lecture 4 Test Coverage - . test coverage. after we have done some testing, how do we know the testing is

Coverage - “overview of legal issues in regulatory reforms in bhutan” a presentation by participants from bhutan 1 .

Coverage - . why are primary sources important?. history as it was written. “to deal with sometimes extreme shortages,

A Theory of Predicate-complete Test Coverage and Generation