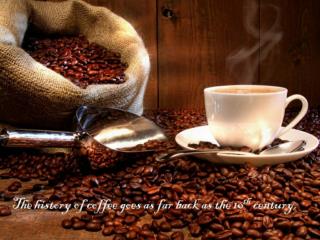 The history of coffee goes as far back as the 10th century. The earliest substantiated evidence of either coffee drinking or knowledge of the coffee tree is from 15th century, in the Sufi monasteries’ of Yemen. The word “coffee” entered the English language in 1582 via the Dutch koffie.Coffee beans were first exported from Ethiopia to Yemen. Yemeni traders brought coffee back to their homeland and began to cultivate the bean. It is said that kaldi discovered coffee after noticing that his goats, upon eating berries from certain tree, became so energetic that they did not want to sleep at night.. A white blossom that smells like jasmine and a red, cherry-like fruit. Back then, the leaves of the so-called "magical fruit" were boiled in water and the resulting concoction was thought to have medicinal properties. As the fame of the coffee plant spread to other lands, its centuries-long voyage was about to begin. Section A - . premarital agreements. warming-up activities. say something about your ideal husband or wife. 2. there are

Bonnie and Clyde - . the romeo and juliet of the crime world. star crossed lovers…. like shakespeare’s teenage lovers