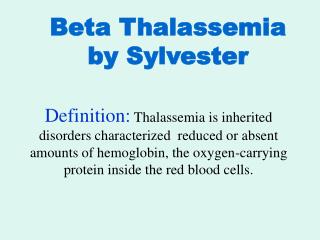 THALASSEMIA - . autosomal recessive blood disease . the genetic defect results in reduced rate of synthesis of one of

THALASSEMIA!! - . by henna and deepa. what is the

Sylvester Stallone - . by: john walker. a time line of his life. born july, 1946 when he was born he tore a facial nerve