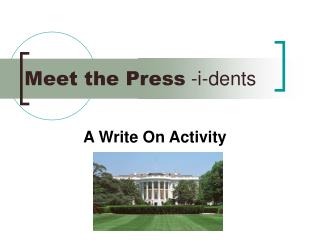 Meet the Press -i-dents A Write On Activity How much do you know about the Presidents? Test your knowledge as we explore 5 of our country’s greatest leaders based on a 2001 U.S. Gallop Poll. 1. Ronald Reagan 18%

i dents - . by: tito akin- aina. what is idents. idents are little animated video that are used to present or identify

Dents - . lucy proctor . what is an ident ?. an ident is a small animation that gets played at the beginning of

Designing I dents for Television - . what is an ident?. purpose. what are they for?. branding – to clearly brand the

Meet the Press – and Make the Most of it - . a primer for getting great publicity for your program – without spending

Meet the - . i’m a giant green sea anemone. i look like a green flower. i live attached to a rock. i eat at high tides.

Meet The - . at the. introduction. please hang on a while to learn more about the dutch national research group, what it