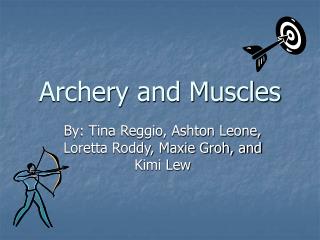 Archery and Muscles. By: Tina Reggio, Ashton Leone, Loretta Roddy, Maxie Groh, and Kimi Lew. Archery is the art, sport, or skill of shooting with a bow and arrow. Archery - . bows. compound bows. recurve bows. in class we use these two types of bows. cams &amp; wheels. unlike a

Archery - . rebecca bielat hpe 324. archery. the art, practice, or skill of propelling arrows with the use of a bow

ARCHERY - Find out where the arrow goes!. archery. 2012 london olympics. archery history. spears were thought to be more

Archery - . history, rules and safety. what is archery?. archery is the practice of using a bow to shoot arrows . archery

ARCHERY - . learning objectives. at the end of this session, each participant should be able to understand: safety

Archery - . why add archery ?. you should add archery because: 1. it will build muscles and stamina 2.people who like

Archery - . a sport for everyone. begin. archery can be everyone’s sport. archery is a sport in which everyone can be

Archery - By clayton richards. archery. couple of things about archery. archery is a sport of pull, hold, focus, and aim.

Archery - By: max mulder. archery. archery is a summer olympic sport where you shoot an arrow at a target. and see who

Archery Fundamentals - . scoring go for the gold!. m. m. joad scoring. every ring has a point value. the closer to the

Archery Bow And Arrows - For more details on our products and services, please feel free to visit us at archery cases,