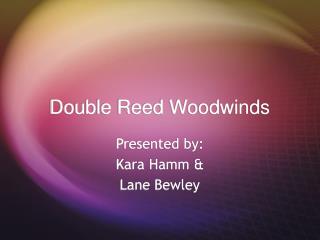 Double Reed Woodwinds. Presented by: Kara Hamm & Lane Bewley. Bassoon. A large double reed instrument with a lower sound than the other woodwind instruments. The Beginning. Similar to the oboe First appeared in 1650 End of 1700’s; had 4-8 keys

Woodwinds - . woodwinds. partially made of wood or were once made of wood sound is created by the player blowing air into

Woodwinds - . ranges and characteristics continued. bb clarinet. sounds down a major second below written most versatile

Writing For Woodwinds - . things to think about…. woodwinds. think about the numbers you are writing for - what is the

Writing For Woodwinds - . things to think about…. woodwinds. think about the numbers you are writing for - what is

Kimberly Reed - &quot;what are the most effective treatments available for new parents, particularly new mothers, who

Lauren Reed - . my brothers and

lions reed - . what does the animal eat?. lions eat meat. meat is good for the lions animals have meat in them