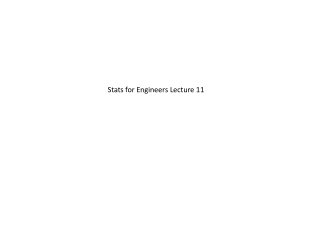 Stats for Engineers Lecture 10 - . recap: linear regression. we measure a response variable at various values of a

Stats for Engineers Lecture 9 - . summary from last time. confidence intervals for the mean. if is known , confidence

STATS 330: Lecture 11 - . diagnostics 3. outliers and high-leverage points. an outlier is a point that has a larger or

Stats 330: Lecture 22 - . multiple logistic regression. plan of the day. in today’s lecture we continue our discussion

Stats 330: Lecture 23 - . multiple logistic regression (cont). plan of the day. in today’s lecture we continue our