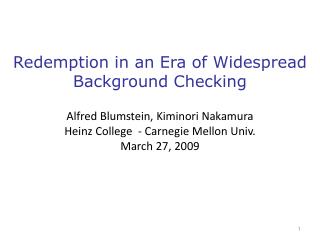 Redemption in an Era of Widespread Background Checking Alfred Blumstein, Kiminori Nakamura Heinz College - Carnegie Mellon Univ. March 27, 2009 Some Discussion at an ASC Meeting in about 1970

Why is Background Checking Still a Thing in Our Social Media Era? - To know more about background check, visit

Widespread Components Of An Application Letter - As a matter of first importance, application letter is a business letter

What are Background Checking Applications? - Each year, hundreds of thousands of seniors are graduating and becoming

AN ERA OF FEAR - . truman wants to prove he’s taking the communist threat seriously, so he institutes…. loyalty

An Era of Nationalism - . the era of good feelings. describes the 2 nd term of james monroe unchallenged in the election

An Era of Reform - . chapter 18. i. the spirit of reform. second great awakening revival of religious feeling 1820-1830s

An Era of Transformation - . from rodowick to guattari to massumi. bijvoorbeeld: russian ark. whether viewed projected in