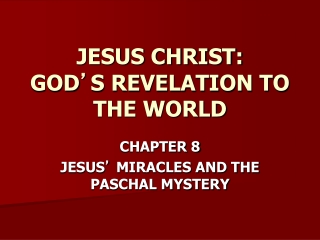 JESUS CHRIST: GOD ’ S REVELATION TO THE WORLD. CHAPTER 8 JESUS ’ MIRACLES AND THE PASCHAL MYSTERY. Jesus, the Miracle Worker. Jesus ’ words were accompanied by many “ mighty works and wonders and signs. ” These prove that Jesus is the Messiah and the Kingdom of God is present in him.

The Birth Pains of the Messiah - . have they started yet? robert c.

The Coming of Messiah - . for unto us a child is born, unto us a son is given: and the government shall be upon his

The Sign of the Messiah - Page 2 of 21. it's all about the messiah. yeshua identified the source of the gospelluke 24:27,

The Birth of the Messiah - . introduction. the gospels of matthew and luke differ from the mark and john by beginning

The Death of the Messiah - . jesus before pilate, the roman governor. series outline. mar. 14: 1. jesus prays and is

Metaphors of the Messiah - . grape expectations john 15:1-5. by: jay brennan. 7 “i am” statements of jesus. the bread

The New and Everlasting Covenant of Marriage : - . why is it called new and everlasting

The Death of the Messiah - . jesus before the jewish authorities. series outline. mar. 14: 1. jesus prays and is arrested

Coming of the Messiah - . by paige radic . definition:. a leader or saviour of a particular group or cause the promised

The Covenant of the Pieces - . eternal unconditional covenant of grace. abram and the covenant. romans 4: 1 ¶ what then

The messiah - . december 22, 2013. believing in miracles. an angel appearing to zacharias elizabeth having a baby past

The New and Everlasting Covenant - . eternal life. “we must begin with the truth about god and our relationship to him.

Jesus: The Messiah of the Prophets - . prayer of the week isaiah 2. 3 many peoples will come and

The Covenant: - . a kingdom tale. luke