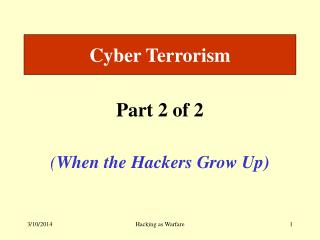 Webinar on Internet of Things(IoT): The Next Cyber Security Target - We are in the age of cyber crimes and just getting

Cyber Liability - . what school districts need to know. data breaches – growing in number. between january 1, 2008 and

Annex A Addendum - . cyber training. training purpose. to review the addition of the annex a addendum to cyber, which

Cyber Crime - . special thanks to special agent martin mcbride for sharing most of this information in his talk at siena

Cyber Crime and Cyber Security Tips - Cyber security is very essential part of a business network and a system. in this